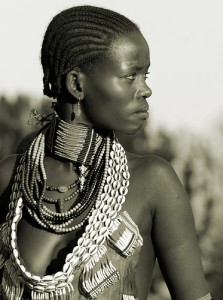 Imagine a coffee-skinned African woman living the simple life of a gatherer on the northern plains of Tanzania.

During the day she is constantly active — walking kilometres away from home, gathering berries and roots, and carrying her heavy load back to the village. She is fit. She has to be, her very survival depends on it.

Her lifestyle is far removed from the Western world where a woman jumps in the car and drives over to the nearest Coles to buy a few groceries for dinner. In contrast to African women, Western women live a sedentary existence.

So who has the highest Total Energy Expenditure (TEE) in a day? Who is burning the most calories?

A recent study1 published last month, set out to answer this question by monitoring and recording the activity level of the Hadza tribe of hunter-gatherers.

In this study, we examined daily energy expenditure and physical activity level in Hadza foragers to test the hypothesis that hunter-gatherers expend more energy each day than subjects in market and farming economies.

Their results were surprising, shattering previously held beliefs about exercise and weight loss.

The hunter-gatherers of Tanzania have the same total energy expenditure per day as Westerners. In other words, even though they were highly active, they didn’t burn any more calories.

Measurements of TEE among Hadza hunter-gatherers challenge the view that Western lifestyles result in abnormally low energy expenditure, and that decreased energy expenditure is a primary cause of obesity in developed countries. Despite high Personal Activity Level (PAL) and dependence on wild foods, Hadza TEE was similar to Westerners and others in market economies.

It seems the body has a mechanism to regulate your metabolism to a set point whether you’re running a marathon or writing a novel. It doesn’t matter how much exercise you do, in the end your body will adapt and return to ‘normal’ amounts of energy expenditure.

The similarity in TEE among Hadza hunter-gatherers and Westerners suggests that even dramatic differences in lifestyle may have a negligible effect on TEE, and is consistent with the view that differences in obesity prevalence between populations result primarily from differences in energy INTAKE rather than EXPENDITURE.

I’m not suggesting exercise isn’t good for you. It is good for your organs, circulation, bones, strength, joints and psychological health. But it’s a myth that going to the gym or heading out for a run will neutralise those calories in the cupcake you just ate.

“Move more” is no longer part of the weight loss equation.

Move because you love your body, move because it clears your head, but don’t worry about moving if you’re expecting to see a smaller number on the scales.