3 Key Steps to Helping a Woman Orgasm, written by Céline Remy first appeared on her website 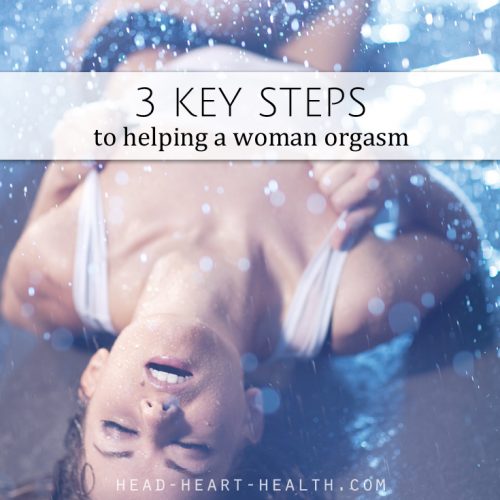 If I were to follow the standard line (in case you don’t know, I am a rebel at heart), my title would say “How To Give A Woman The Best Orgasm Of Her Life”. That title would be catchy but totally inauthentic to what I know and believe. So let’s reframe how we think of male/female dynamics and who gives who an orgasm.

You see, orgasms aren’t something that is given to us by another, like flowers or chocolate. Instead, orgasm is a state of being – a state we achieve when we succeed in dropping our worries, fears, and inhibitions, and give ourselves full permission to feel pleasure. In other words, we are responsible for our own orgasms and it can’t be given to us. It can only be simply facilitated.

Most women have enormous difficulties reaching any kind of orgasm, but with some guidance and a safe space, they can learn to open up more and relax. Only relaxation and receiving can bring a woman to orgasm, and that is something she does for herself. Nothing else will work without that opening within her.

Now you have the key to helping her achieve orgasms more often, and to greater heights of pleasure. Now let’s explore this more.

Often a lack of orgasm is because of a lack of connection to the body. If you can help her bring awareness from her chores and inhibitions, and help her slow things down mentally, this allows her awareness to shift to her own pleasure. This is the first step for her to warm up, and with that, chances are it will stoke her fire.

The 3 Key Steps to Female Orgasm

A conscious, melting touch without squashing, squeezing or overstimulation of the nipples will awaken the energy of the breasts. There’s a direct connection between the breasts and the vagina. A woman with a soft, open heart will have a juicier pussy. The lubrication glands in the vagina respond abundantly when the breasts are lovingly touched. So, if she is not juicy yet, try that. And if she is, try it anyway, because it adds to her desire and readiness for you to penetrate later.

Most people focus solely on the clitoris glans, but it’s really just the tip of the iceberg. There is so much more to the clitoris than the eyes can see. The clitoris is composed of three parts:

This erectile tissue in the shaft and legs means that the head of glans of the clitoris is not the only area that can become enlarged when stimulated properly. So pay sweet attention to all parts, for the best sensation, and for the best buildup to higher levels of pleasure for her. You want to stroke the clitoris very lightly, at least to start – the upper-left quadrant is supposedly the most sensitive.

Now you also want to focus underneath the outer lips, so you can stimulate what’s called the vestibular bulbs, until they get big and puffy, and sometimes get darker. They also attach to the clitoris shaft, so when you apply gentle firm pressure on them, they get engorged and help stimulate the clitoris shaft and glans as well. That’s taking the sensations to the next level and it will make penetration inside the vagina much more pleasurable for her.

Last but not least: the Vagina

A technique called “clocking” involves gently massaging with a soft finger all around the inner walls of the vagina, spending just 15-60 seconds on each “hour position” inside. This will help relax the vagina and release trauma to make room for more pleasure in her sensations. There’s no need to specifically focus on what is called the g-spot, at least not for a while, because you actually want to awaken more area for more sensations. Imagine that the top toward the pubic bone is 12 o’clock, and massage in and out slowly, with slight but increasing pressure.

Then move around the clock in gentle circular motions, with 6 o’clock being towards the anus. Take your time around the clock, and discover which parts are more responsive to the touch. If there’s pain present, simply hold your finger in place and have her breath into it, until it softens or dissolves.

If you take it slow, she might be more ready for a higher experience of pleasure and be ready for penetration. Ask when she is ready. If she wants more of this new, sensitive, giving foreplay, give it to her. You can’t give her an orgasm, but you can give her what she needs to give herself one.

Remember the journey is more important than the destination.

Put on your explorer hat and have fun.

Holistic Sexologist and Certified Sexological Bodyworker, Céline Remy offers a unique body-based methodology to crack open her clients through pleasure. She brings a ridiculous amount of joy and laughter in everything she does and wants every man to step into his power with strength and sensitivity and every woman to experience the sex she deserves and craves. She teaches both men and women how to unleash their sexual potential, bring out the best in each other and have mind-blowing sex for hours. View all posts by Céline Remy

4 thoughts on “3 Key Steps to Helping a Woman Orgasm”