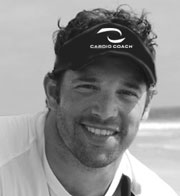 Sean O’Malley, the creator of Cardio Coach, first appeared on my old blog in March 2007  ~ Cardio vs Weights. I’ve mentioned him in posts no less than six times. Alongside Tom Venuto, he holds the position of being my internet boyfriend.

Apparently I once said “he could be reading the phone book and I’d work up a sweat!”  In the past few weeks I’ve listened to him ask me whether I’m a lion or a gazelle now I’m back in the gym doing his interval training MP3s.

Today I found out that Sean O’Malley passed away suddenly on Sunday at age 40. His memorial service is on Friday.

I cried. An entirely inappropriate amount for someone I’d never met. I feel like I’ve lost a friend.

The unsettling thing is no-one is saying what caused his death. People keep asking but there is only silence from his family and friends. No-one has mentioned an illness or an accident.

It breaks my heart because I think he might have committed suicide. He was a forty years old, the same age my husband was when he killed himself. I know I’m jumping to conclusions. It’s what we suicide widows do.

Did Sean O’Malley take his own life last Sunday?

Sean O’Malley was a vibrant, kind, giving, warm and wonderful man. He was gorgeous, fit, healthy and truly loved. Losing such a brilliant man leaves the world a darker place.

Whatever happened Sean … please be at peace knowing you touched my life and the lives of thousands of others. We’ll miss you.

This is the note left on his Facebook page by his sister Colleen. This is one time I wish I was wrong.

So it’s one week since I flew down to Florida after receiving a phone call I hoped and prayed I’d never receive at 7:30 that Sunday morning.  Although I asked my Mom as she sobbed through the phone what was wrong, and immediately asked where Dad was, I knew deep down it was Sean.

For those of you who didn’t know, Sean struggled for many years with a disconnect between who he thought he was and who he truly was.  Although Cardio Coach was his dream, for the past few years he couldn’t believe that voice on the earphones was actually his…  He battled mental illness since his late 20’s (and perhaps before based on some information we learned this week).  Despite the demons that plagued him, he managed to inspire so many people.

Those of us (family and friends) who knew of Sean’s suffering did everything we knew possible to help him – trust me – from finding the best doctors, to experimental and alternative treatments, to providing him with spiritual support, to giving a safe place to retreat whenever the depression would hit, to dropping him off on the Appalachian Trail almost two years ago on his birthday – April 12th –  so he could try to find some glimmer of hope, some reason to live.

For the past two years, he spiraled into a deep depression and like so many others who have faced similar battles, could have won an Academy Award for his performance.  Even my parents and I couldn’t read him the past few weeks, but it has become apparent from the conversations I’ve been having this week, the letters and emails I’ve read, that Sean had made his choice weeks ago, although not from a healthy state of mind.

Please know that Sean’s legacy will not end with his death.  As we put more puzzle pieces together and share his and our story more, we know that we are not the only ones who have experienced similar situations.  No matter how ‘taboo’ mental illness and suicide has been in the past, it is apparent that a transformation is taking place, an awareness growing for the importance of helping others find peace, comfort and love as they work through mental illness and suicide in their own lives or in the lives of those they love.

I would appreciate any insights and wisdom that any of you have to share that might help us better understand what we are experiencing and what next…  I would also love to connect with those who have seen behavior changes following a concussion, as we have been exploring how repeated concussions from contact sports affect mental health.

Although Sean didn’t believe he had the right or even the ability to call himself the Cardio Coach or stand in front of anyone as a coach anymore, I have no doubt that the man you all knew was truly Sean O’Malley – the Cardio Coach – my baby brother.  He was, and always will be a hero and inspiration to so many of us.

With love and thanks to you all,

p.s. I apologize for the FB posting, however it is the best way to share these words and to continue to bring awareness to the legacy of Sean Michael O’Malley, our Cardio Coach.  I also want to extend thanks to so many of you who were there for Sean throughout the years.  Know that he loved you, and there is nothing… NOTHING any of us could have done different, said different.

22 thoughts on “The question of silence”