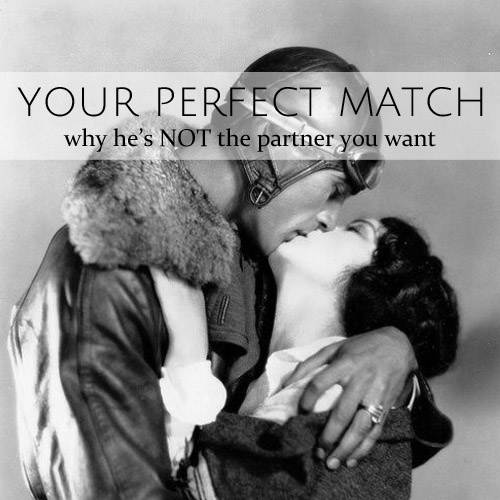 One of the things that worries about me about online dating sites, is their emphasis on finding your perfect match. Compatibility, according to them, is finding someone as similar to you as possible. I believe this approach is flawed.

One of the many reasons relationships break down, is because sexual attraction seems to disappear over time. I am a student of the David Deida school of thought, which champions polarity is the founding principle of all passionate relationships — masculine and feminine energy magnetically drawn to each other.

There has to be a ravisher and a ravishee for sex to be hot and sweaty. As someone with strong feminine energy (in relationships at least) I am attracted to my opposite. I prefer a man who is decisive and assertive rather than one who is as emotional as me.

It is not only in sexual matters that having someone different to you is interesting and exciting. Without differences in a relationship, you can never learn or grow.

My boyfriend loves sport and I hate it (curiously my ex-husband hated sport too). My boyfriend introduced me to the excitement Tour de France, the World Cup and even cricket. I admit that I now enjoy watching sport with the one I love… even cricket (eek – I can’t believe I said that).

In contrast, my boyfriend had never been to see a show. Since we’ve been together we’ve seen opera, dance, musical theatre and cabaret together. There is nothing more enjoyable than watching someone experience the magic of theatre for the first time.

In other areas we are different too — I’m uptight and he’s laid back, I get there early and he gets there late, I make the bed and he leaves it unmade. A little bit of each of us rubs off on each other. These days I’m a little more relaxed and he’s a little more conscientious. We learn from each other so life is never boring.

Birds of a Feather

Not everything should be in opposition, otherwise you’ll end up in constant disagreement. Sometimes, birds of a feather DO flock together.

The emotional level of the relationship must be similar. You should like or love each other the same amount. If someone is totally besotted with you and you kind of like them, then it’s doomed. It is also important to have similar ways of expressing how you feel. Someone not comfortable with holding your hand in public isn’t going to last long if you enjoy smooching in the front row at the movies.

It is a recipe for disaster when you don’t agree on core beliefs and values. My ex-husband was an atheist and I am deeply spiritual. He thought my belief in the magic of living and the goodness of the human heart naïve and delusional. My boyfriend and I stare up at the stars and wonder where we’ve come from and what lies ahead after we leave this physical experience. It’s wonderful to share the same view of the world and to contemplate that our souls have always been looking for each other since before we were born.

A similarity in sexual drive is also important. If you want it all the time and your boyfriend doesn’t then there is trouble ahead. Choose a man who wants you as often as you want him.

A Little Bit of Both

Intellectual compatibility consists of both similarities and differences. You want to be with someone who is as smart as you or perhaps smarter. It doesn’t have to be educational intelligence, it can be life experience or expertise in a specific area. The aim is to have something in common and something to learn. Being on the same level will eventually get boring, as will one of you being at a totally different level.

My boyfriend is smart. He won my heart with eloquent emails crafted with perfect spelling and grammar. He is more emotionally intelligent than I am and teaches me how to embrace my feelings and express myself rather than keep things bottled up inside. He says I know more about the way people interact with each other and how to be unattached to material possessions. Our minds are interesting to each other.

The Perfect Match is NOT Perfect for You

You don’t want someone who is exactly the same as you — who wants to go out with themselves?

Look for the differences, the interesting quirks, the fascinating opposites. Then add a dash of similarities in emotional investment, spiritual values and intelligence.

Your ideal man is full of flavours you are yet to taste. Don’t limit yourself to the same bland diet you’re already used to.

Do you agree sameness is boring or do you disagree?

18 thoughts on “Internet Dating • The Myth of the Perfect Match”