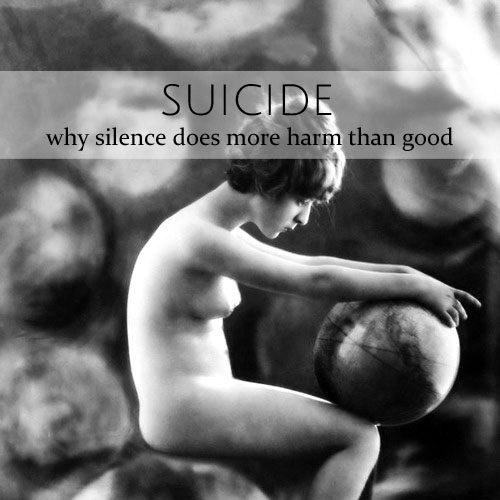 In February, 2014, Charlotte Dawson, alone in her Sydney apartment, committed suicide. Although I didn’t know her personally, I know some people who did. Those people have joined the thousands in Australia and all over the world, who will live the rest of their lives with the question why echoing through their minds every time they think about the death of their loved one. I know how they feel, I belong to this exclusive club no one wants to join.

Every time someone kills themselves, it pricks at the wound in my heart, leaving the tender skin bleeding again. The loss of a vital, special, unique human being is a tragedy, especially when the tragedy might have been preventable.

The dialogue around such a death always includes a warning that we mustn’t talk about it, because discussing suicide encourages others to take their own lives. The media, citing old studies and questionable research, reminds us that suicide is contagious.

It is time for this worn-out argument to be dismissed.

Instead of glossing over the way someone died, I think we should tell the truth. People who kill themselves, don’t slip quietly and pleasantly into an eternal sleep. Any method of dying is painful and traumatic. Struggling for breath, vomiting, losing control of your bodily functions, a bullet ripping through flesh, the snapping of bones and the severing of nerves — none of this is glamorous or romantic. Suicidal people search for relief — we should be reminding them how horrific death can be, not pretending that the corridor between life and death is filled with soft music and candlelight.

But what of those people who are encouraged to follow in the footsteps of someone famous who took their own life?

I believe we overestimate the power of suggestion. If the media, films, books, speeches and songs had the power to change people’s desires, we would be able to convert entire nations to a single religion or a political party. At the very least, we could transform depressed* people into happy ones, with the power of our words.

Healthy people don’t contemplate ending their lives, going on a school shooting rampage, or brutally assaulting a stranger in the street just because they hear about other people doing it. The people who are at risk of committing suicide are still at risk no matter what other people do or say.

The greatest of these risks is that we still perpetuate the myth that there is something shameful about feeling depressed or overwhelmed. While people remain too embarrassed to tell their partner, their boss, their friends and their colleagues that they can’t see any light at the end of the tunnel, that ending it all seems a viable option, then we will continue to lose our family, our friends and celebrities to suicide.

The stigma of depression is far more damaging than speaking the truth.

This stigma is what we must focus on ending – one conversation at a time.

[*Not all depression is a mental illness. See this article which distinguishes between reactive and endogenous depression as well as giving excellent advice about suicide in general. Please read it if you are concerned about this issue.]

16 thoughts on “Suicide – why silence does more harm than good”