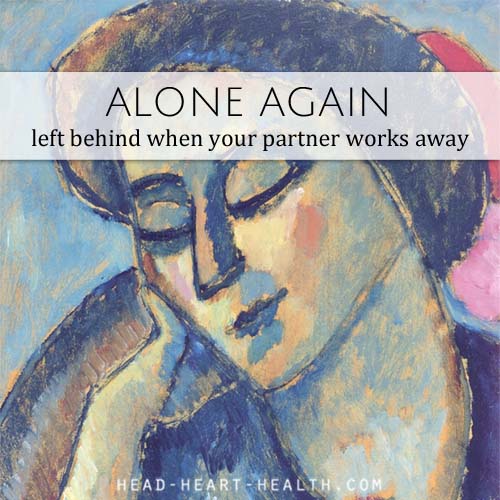 As well as being an actual widow, I have become a work widow. My boyfriend works in other cities and other countries more than he is home. I am often left by myself in an empty house.

I’m not the only one. My friend Leeane had the same problem.

Leeane’s husband used to be in the army. They met when she was doing army reserve training. She loved the way he looked in a uniform.

Once they were married, Leeane hated that her husband was away for weeks, even months at a time. She nagged him about how much he neglected her. In the end, he gave up his job in the army and got a job in the local bank. Leeane had everything she had wished for.

But things started to go downhill once her husband was home all the time. It wasn’t because they got on each other’s nerves, they enjoyed each other’s company more than ever, but Leeane started losing her desire to have sex with him. Her desire faded along with the image of her husband commanding his troops.

One of the biggest drivers of sexual desire comes with wanting something or someone you can’t have. Whether that means lusting after a man who you are unsure feels the same way about you (as you do in the first flush of romance) or fantasising about someone else’s husband, the most intense sexual feelings emerge when we are denied instant gratification. In a relationship (as with a lot of other things) not getting what you want as soon as you want it, makes you want it even more. And the opposite is true —  even the most delicious meal served up three times a day gets boring.

Leeane didn’t want her husband anymore because she already had him. Not only that, he wasn’t as passionate about working in a bank as he had been working in the front-line of defense. The man she had fallen in love with didn’t exist any more. He had morphed into a mild-mannered office worker in a business suit. In the end, Leeane shut down her passionate nature and stayed in a sexless marriage with the man she had created. After all, he had sacrificed so much to make her happy.

I think about Leeane when I moan about my boyfriend being away. I don’t want to stop him doing what he loves, and I don’t want to lose my longing for him. It might be uncomfortable to have to wait to see him, but when he’s around, we can’t get enough of each other.

My boyfriend is hardwired to seek adventure and solve problems. If I take that away from him by demanding he changes his job, I risk losing my desire for him.

And besides — absence makes the heart grow fonder. This I know to be true.

What about you? Does you partner leave you while he goes off to save the world?
How do you cope? Do you think it makes him sexier?