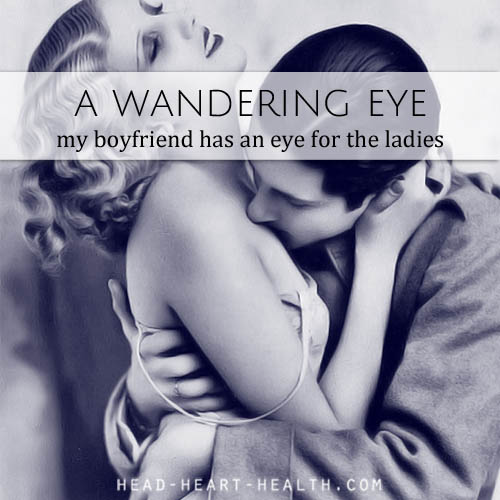 My boyfriend and I go to the beach most weekends in the summer. Since we’ve moved north of the city, the ocean is less than a ten minute walk away. He makes me wear sunscreen for the first time in my life, but I get annoyed because I never seem to go as brown as I used to. ‘You don’t want to end up looking like a crocodile,’ he says. My decolletage (what a wonderful word – the upper part of a woman’s torso, comprising her neck, shoulders, back and chest, exposed by the neckline of her clothing) is too late to save. The creases I wake up with in the morning never seem to disappear.

My boyfriend has a wandering eye. When a young woman walks down to the sea in her skimpy bikini, his gaze rests on her firm, lithe, unwrinkled body. I’m no longer young and my body is curvy and soft. I have stretch marks and cellulite — I have every reason to be jealous.

Except I’m not. When I see him looking at other women it makes me smile.

My boyfriend has an eye for the ladies, which is fine by me.

1. It means he has a healthy libido.

I’ve been with a man who isn’t interested in sex. He didn’t want me or anyone else. A wandering eye reminds me that my new man likes to get ‘jiggy’ all the time.

Primal sexual attraction doesn’t take into account age, availability or compatibility. Just because my boyfriend thinks a twenty-two year old has a nice body, once his brain kicks in he knows she is not really his type. And even if she was, it is unlikely she would be interested in someone over fifty.

3. He likes the curvy ones.

If three girls are walking together, his eyes rest on the one with full breasts, hips and thighs. The girl who could be on the front of ‘Oxygen’ magazine? She’s overshadowed by her heavier friend. Sometimes I wish I could tell them that they don’t have to be skinny to be attractive. Men’s tastes cover the full range of body types.

I wear a bikini on the beach. My boyfriend went with me when I went to buy it. In the shop, I swallowed down my self-criticism and came out of the changing room to ask him for his opinion.

‘The erection test,’ he said. ‘You’ve just given me one.’

After my boyfriend checks out a girl on the beach, he brings his attention back to me and tells me how beautiful I am. His eyes might stray but his heart, his soul, his mind and his body belong to me.

Should the day ever come when he falls in love with someone else, I’d rather he leave me to be with them, than hang around miserable with me. He doesn’t really belong to me — he’s just on loan. I’m going to spend every moment appreciating the time we have together right now, rather than tell him off for being himself.

Do you have a partner with a wandering eye? How do YOU deal with it?

28 thoughts on “A Wandering Eye”