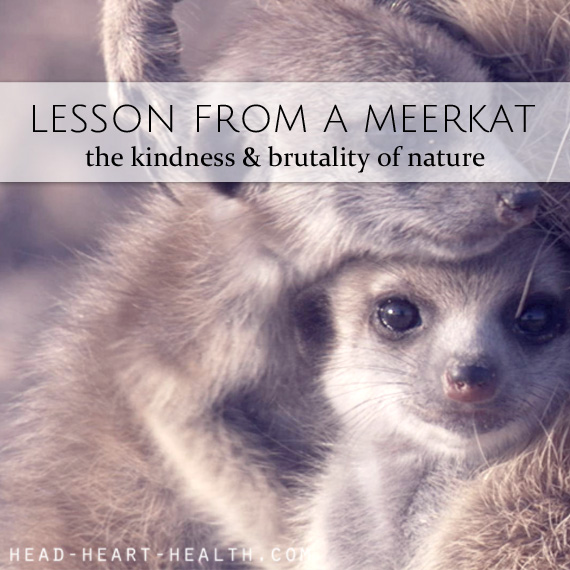 Late one night, I watched a documentary about Meerkats. One of the adult males had been bitten by a snake during the night. The Meerkat, named Ernesto by the filmmakers, crawled out of the burrow, barely able to move. His face was black and distended, his eye swollen shut.

As the creature lay panting for breath, I turned away, my eyes spilling over with tears. I couldn’t bear to watch Ernesto’s chest rise and fall for the last time and then stop altogether. Because that’s what happens in nature documentaries – an animal dies, as if to remind us of the brutality of nature or perhaps of our own fragile existence.

Contemplating the death of Ernesto brought almost as much pain as watching a human being lose the fight against disease or old age. I felt embarrassed by my sensitivity which seemed to border on sentimentality.

With my heart breaking for some random animal dying in African desert, I recognised for the first time, that this was what it meant to be one with the whole world – to feel the pain of the forests, the oceans, the mountains, the animals, the birds and the insects. This sensibility, this connection to the earth, is what it means to be female, woman and goddess.

Amazingly, after two days, Ernesto managed to survive the poison coursing through his body and rejoin his family. It would seem that nature is not always brutal, she sometimes gives us second chances.

2 thoughts on “Lessons from a Meerkat”