I haven’t been to Bikram Yoga class since Friday. Having three days off is not what I planned. Saturday, raining and windy, was my allocated day off and I expected to be back in the hot room on Sunday. But then the last thing I imagined happened …

Let me give you the back story briefly. My last period was early November and since then I’ve experienced some of the classic signs of perimenopause — hot flushes, no period and insomnia. When the hot flashes stopped after visiting Shelley in Brisbane early in January (a weird coincidence with no logical explanation) and I started sleeping again, I thought I was going to stroll into menopause free and clear.

Until Saturday night that is — when my period arrived after being absent for almost four months. Yesterday and today I’ve been mostly out of action due to stomach cramps and heavy bleeding. I’m feeling better tonight so I plan on going back to yoga tomorrow.

So I ask myself … has Bikram Yoga balanced my hormone levels and reactivated my fertility? I feel like it’s an entirely likely scenario. 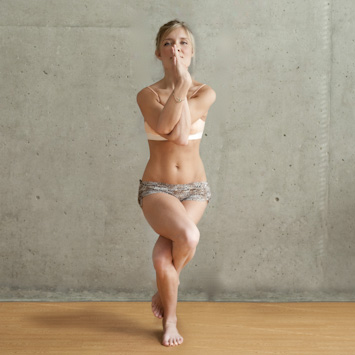 Miracle or coincidence? Has practising yoga changed the nature of your menstrual cycle?

{photo source} — FYI:  I look nothing like this photo when I do the pose – my hands aren’t in prayer and my foot doesn’t make it that far around my leg. My eagle looks more like an irritated chicken!