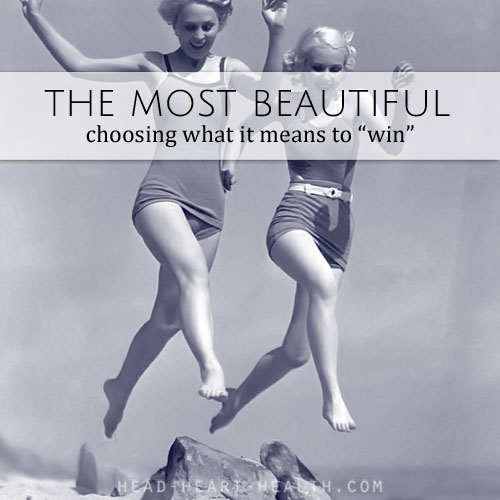 An English naval officer was marooned on a remote island in the South Pacific. He had befriended a native man to whom he was constantly trying to prove his superiority. For the Englishman, everything was a contest. This puzzled the native, for whom life was fun, like a game.

One day the Englishman, in a typical fashion, threw down a challenge to the native. Pointing out a spot about half a mile down the beautiful sandy beach, he announced, “We will have a competition from here to that distant point.”

The native agreed. The Englishman, always taking charge of things, set up the conditions: “We will train in our own style, privately, for two weeks. On the fourteenth day, we will compete.”

When the day arrived, they took their places on the starting line and set off. With his usual intensity, pushing himself to the limit of his physical ability and grimacing with the strain, he drove himself through the sand until, gasping for breath, he lunged for the finish line. Exhausted and soaked in sweat, he turned to see how his opponent was doing.

To his joy and amazement, the native was only about halfway to the finish line. The Englishman watched him float gracefully along the shoreline with long, comfortable strides, a smile on his handsome face. When he finally pranced across the finish line he found the Englishman jumping and down and shouting “I won! I won!”

The native looked at the Englishman in disbelief. “What? You won? No, I won, I was the most beautiful!”

from
Body, Mind, and Sport: The Mind-Body Guide to Lifelong Health, Fitness, and Your Personal Best