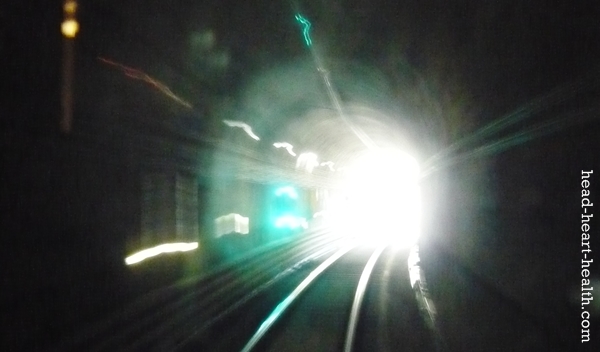 In my imagination I am lying in bed with Duckfish, asleep, in my old flat around the corner from here. It is 3am. An unusual sound wakes me. I see a familiar figure standing at the end of the bed. He is holding a gun. In this dream, three of us end up dead instead of one.

In my imagination I see people on a train platform sprayed with bullets… or people on a train that doesn’t stop being crushed as it smashes into another … or watching in horror as a man leaps on to the tracks in front of a driver who can’t brake in time.

In my imagination I know it could have been much worse. A mental illness, left untreated, is an explosion waiting to be detonated. A theatre full of people watching a movie in the dark brushes up against a man who doesn’t know what to do with his pain. The end result is worse than anything I can imagine.

Some days I am happy that the only person the man I married hurt was himself. I feel guilty because I’m relieved, because I am safe, because the tragedy involved only one person.

Because — when I stop and think about it —  it could have been much worse.

4 thoughts on “It Could Have Been Worse”