Dominating the lush Tweed Valley in New South Wales is Mt Warning.  The mountain (1156m), a remnant central vent of an ancient volcano, receives Australia’s first rays of sunlight; to catch that early glow, some torch-wielding visitors begin the 9km, five-hour return hike in darkness. If you prefer starting and finishing in daylight, make sure to set out prior to 1pm in winter. Either way, mentally prepare yourself for the final section, which involves scrambling up a steep, rocky slope, using a chain for assistance. — National Geographic

In 2008 and 2009 I trained for 90 minutes a day six days a week alternating between lifting weights and doing cardio. I weighed less than I do now. I was a figure competitor — at my leanest and supposedly my fittest.

Today, on Duckfish’s birthday, he and I spent two and a half hours climbing up the mountain you see in the photo: Mt Warning or Mt Wollumbin. I’ve been back in the gym less than three months and only working out a couple of times a week.

Although I got hot and sweaty, I was never gasping for air and my legs kept going without muscle burn or fatigue. Even on the final ascent to the top, which was a vertical climb in torrential rain with only chains to hold on to (past about 25 of those posts in the photo below), my legs and arms were strong. 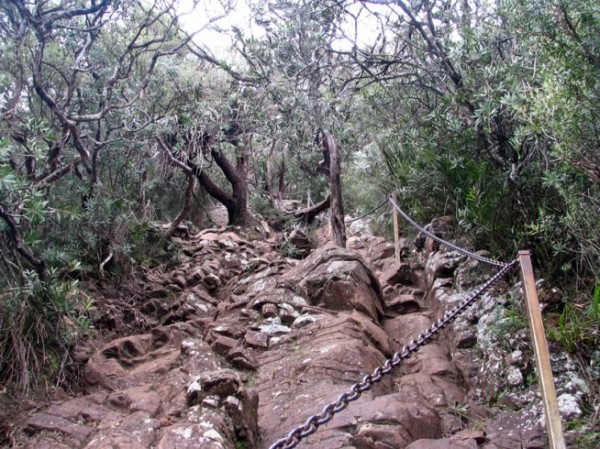 I seriously doubt that I would have been able to climb this mountain when I was in ‘peak’ condition. I don’t remember ever feeling this strong before. In my bodybuilding days I wouldn’t have had the sustained energy to make it to the top.

A five-hour hike through rain, creeks, rocks and mud requires a body that is nurtured and well nourished.

This is what it really means to be fit. Nothing about standing on stage in a sequinned bikini comes anywhere close to this.

→ I’m guest blogging at Rosie Molinary‘s site today:  Abandoned or Chosen? … is my adoption story. Click here to read it.

10 thoughts on “What it really means to be fit”