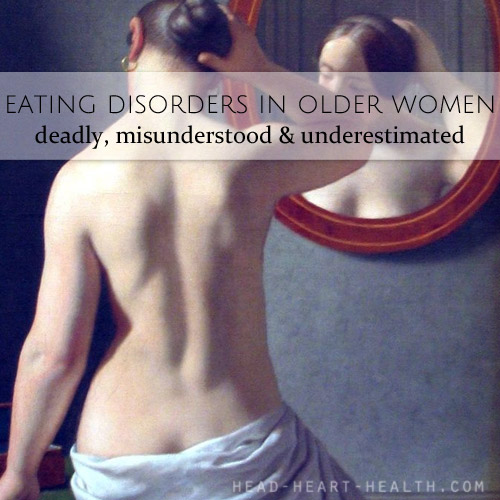 Simone says she is fit and healthy. “I always eat healthy food and stay within my calorie limit for the day. I’m running the City to Surf in August so I get up and train for at least an hour every morning before breakfast. The diet I’m on at the moment lets me have a cheat day once a week so on Saturdays I eat anything I want. Sometimes though, I get out of control and eat too much. When that happens I feel ashamed and disgusted with myself so I usually try to fast the next day, do an extra running session and take a few laxatives to cleanse my body and detox my digestive system.”

Simone has an eating disorder.  She is demonstrating all the symptoms of Bulimia Nervosa as defined by the World Health Organization’s classification of diseases. She is constantly preoccupied with her body weight and eating, and regularly succumbs to episodes of overeating consuming large amounts of food in short periods of time. She then attempts to counteract the ‘fattening’ effects of food by taking laxatives, exercising excessively, and restricting her diet even further.

Simone doesn’t think she has a problem. In her mind, bulimia is the domain of adolescent girls who make themselves vomit and no matter how sick she feels after overeating, she has never made herself throw up. Simone says, at 42, that she is just trying to stay young and in shape.

There are many women like Simone in Australia, some keep their secret hidden and others seek help. She belongs to a new generation of women in their thirties, forties and fifties who suffer from an eating disorder.

Eating Disorders in Older People on the Rise

According to a South Australian study of 3,000 people diagnosed with eating disorders, older participants account for over 60% of the total group. This is an increase of close to 15% in the last decade.

The study looked at three types of disordered eating  behaviours – binge eating, purging and strict dieting – and found increases in the older age group in all areas, the most significant being those who are on a strict diet, more than doubling from 25% in 1995 to 53.5% in 2005.

The Definition of an Eating Disorder

Data on the prevalence of eating disorders in the general population in Australia is difficult to validate as there are few large-scale community based studies. According to the Department of Health and Ageing’s Mindframe initiative, approximately 2% of Australians will experience some type of eating disorder at some stage in their life. The National Eating Disorders Collaboration (NEDC) relies on international trends to estimate the number of people in Australia with eating disorders.

Older women with bulimia are experts are disguising the disease blaming the effects on their physical health on ageing, menopause or their commitment to health and fitness. But the consequences of eating disorders are serious and can be fatal. Women can encounter health problems like malnutrition, fainting and fatigue, irregular bowel movements, muscular and skeletal damage from excessive exercise, loss of menstruation, osteoporosis and electrolyte imbalances that can lead to irregular heart function and sometimes death.

The psychological effects can also extremely grave. Sufferers may develop anxiety, obsessive compulsive disorder, depression, substance abuse problems, engage in self-harm, and may even commit suicide. In a 2009 University of Minnesota study of the mortality rates in patients with eating disorders, the prevalence of suicide in bulimic patients was found to be higher than those with anorexia.

The Culture of Thinness

Recent news stories have attributed the rise in eating disorders in older women to the cultural expectation that women should be thin in order to be attractive. The New York Times article An Older Generation Falls Prey to Eating Disorders quotes Cynthia M. Bulik, director of the Eating Disorders Program at the University of North Carolina, as saying:

We’re hearing from women, no matter how old they are, that they still have to achieve this societal ideal of thinness and perfection. Even in their 50s and 60s — and, believe it or not, beyond — women are engaging in extreme weight- and shape-control behaviours.

The Globe and Mail (Canada) describes this new epidemic as “The Desperate Housewives Syndrome”.

Images of female bodies and their body parts are everywhere – television, films, fashion, magazines, advertising – and they all show thin, young, beautiful women as the ideal body shape. The diet industry tells us that if we lose those last five kilos then we will be happy, successful and respected. This is the cultural landscape that we live in. How much this idealization of thinness is responsible for the increase in eating disorders in women of all ages is hotly debated.  It may be that older women are more susceptible to the cultural and media obsession with being thin as a measure of beauty and success when it becomes harder to look youthful as they age.

In an effort to reverse this media focus on youthfulness, thinness and unattainable standard of beauty, the Australian Government created the National Advisory Group on Body Image in 2009 and asked them to create voluntary industry codes of conduct for the media. The codes request “more diversity in the selection of models, a wider range of clothing sizes in retail fashion, the use of realistic and natural images of people, and disclosure when images have been digitally manipulated” in an effort to minimise the effect the media has on our perception of what normal people look like. With images in the media, advertising and fashion industry still highly manipulated, there is no assurance that they will ever adopt these voluntary codes.

5 thoughts on “Eating Disorders in Older Women : Deadly, Misunderstood and Underestimated : Part One”