5 Tell-Tale Signs Your Partner Might Have a Mental Condition is written by Alex Moore from Schiz Life. 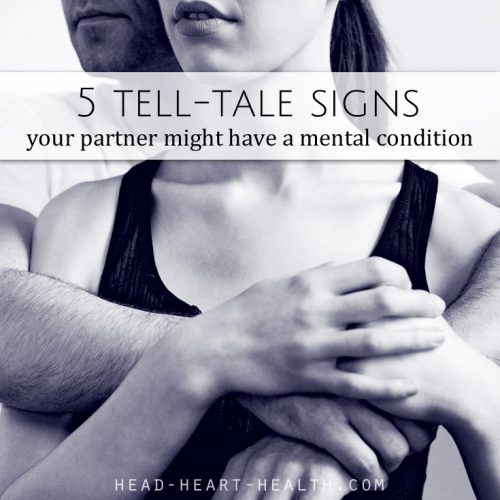 You have made the commitment to your partner to go through life together, through all of the ups and downs — including sickness and health. Part of this commitment is getting to know your partner better than they know themselves. If you have a close relationship, you are likely to know if something is off with your partner, maybe even before they know it themselves.

Mental illnesses can be debilitating to a relationship, but if you love someone, you will stick by them and become the foundation of their support system. Knowing what lies ahead can be a huge asset in keeping your relationship strong when you are faced with the possibility of a mental illness such as schizophrenia.

There are three phases of schizophrenia: Prodromal, Active, and Residual. The prodromal phase is the first phase of schizophrenia, and this is when you would start to notice some changes is your partner’s behaviour.

The prodromal phase is characterized by symptoms that occur when a person just begins to develop the disorder. It includes the entire period of time from the onset of the behavioural changes to the first full-blown psychotic episode. It is hard to diagnose someone in this phase because the symptoms that are often presented could be the symptoms of other mental disorders as well, such as bipolar disorder and depression.

Changes in social activity are one of the first displays of schizophrenia. If your partner is suffering from the disorder, they may try to isolate themselves and may have trouble forming or keeping their relationships. They will seem to lose interest in things they once loved and become lost in their own thoughts.

Schizophrenia causes people to have trouble conveying emotion. Some will not be able to experience any joy from activities they once loved, but others will feel nothing at all. Many feel discouraged about the future and may experience thoughts of suicide. Feeling detached from their body is common, as is hypersensitivity or hostility in response to their feelings getting hurt. Sometimes they will have significant mood swings or will start crying or laughing at inappropriate times.

Individuals with schizophrenia tend to neglect their personal hygiene. Habits of washing their clothes or hair, and brushing their teeth seem to disappear. Their behaviour will deteriorate and they may not be able to participate or engage in a purposeful activity.

Sleep disturbances are common in people who suffer from schizophrenia. Some will suffer from insomnia, while others have trouble waking up and getting out of bed. Motor skills seem to deteriorate as they become clumsy and jerky in their movements. They may even lose their interest in intellectual goals and conversations. Stress will intensify these changes, and they may have difficulty dealing with minor problems.

Many people who suffer from schizophrenia display cognitive problems. Making up new words and repeating the same thoughts over and over again are common. Their thoughts and conversations may seem directionless and unrelated. The disease damages the part of the brain that should recognize if something is wrong, so they may have no idea that they aren’t making any sense. They may develop forgetfulness, poor concentration, and difficulty verbally expressing their thoughts.

Active and Residual Phases of Schizophrenia

In the Active phase of schizophrenia, people will engage in a full-blown psychotic episode. These include hallucinations, delusions, disordered thoughts, and a loss of motivation and emotion. The delusions are paranoid beliefs that something is happening like someone is out to get them or they are being controlled by an unknown force. Hallucinations are very similar, but they are sights and sounds that are real in the mind of the person experiencing them. The disordered thoughts and loss of motivation are intensified from the Prodromal phase.

The Residual phase mirrors the Prodromal phase, but the active psychotic episode has subsided. There may be residual effects of the Active phase, like a belief they are still being controlled, but they can’t communicate with those people anymore. Some people will fully recover from a psychotic episode, but others will need treatment and therapy for the rest of their lives.

Schizophrenia is not as uncommon as most people think. It actually affects 1 out of every 100 people to some degree. Meera Popkin, the lead in the Broadway play, Cats, was diagnosed with the disease in 1997. She had to leave Broadway but came back after she recovered with her treatment.

John Nash was a mathematical genius and winner of the Nobel Prize. The movie A Beautiful Mind is based on his life’s story and battle with schizophrenia.

If your partner is displaying signs of schizophrenia or other mental illness, you should seek help as soon as possible. Early detection and a good support system are the best ways to fight this disease.

Alex Moore is a writer and editor looking to raise awareness of mental health. Having a family member and a very close friend suffering of schizophrenia has made an impact on Alex's writing. Find out more about Alex on facebook and twitter. View all posts by Alex Moore