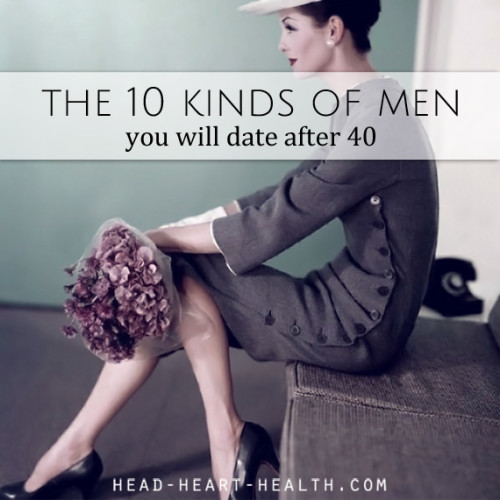 Phew! You can breathe a sigh of relief — you have made it through a bad breakup or divorce and you are ready to face the world again. You put your profile up on an online dating site and wait for the invitations to roll in.

But things are not as you imagined. The men who ask you out aren’t quite what you expected. Here are ten different kinds of men you will date after your forties.

Harry was probably a child or an early teen in the 1970s and missed out on the chance to be a hippy, so he is making up for it now. He goes to yoga at 5am every morning and eats a raw diet. He will look at your leather shoes and handbag with disdain. He won’t take you to a bar, unless it is a juice bar, and he will need to be asleep by 9pm every night.

To say Alan doesn’t like his ex-wife much would be putting it mildly. He can’t stand the sight of her. So much so, that when he picks up the kids, he makes them catch a bus to the next suburb so he doesn’t have to see her. He hates his ex-wife so much he can’t stop talking about her. Apparently, she’s a bitch.

Walter is easy to spot because all his profile photos show him next to his boat, his sports car or his motorbike. He wants to fly you to another city for dinner before he’s even met you. His children go to an exclusive boarding school and he bought his ex-wife her own apartment so he could stay in the marital home with the private jetty. All Walter talks about the stock exchange and the pre-nup he is going to get this time around. It’s enough to make you cry.

Brian may have been a Christian all his life, but he has only recently accepted Jesus as his Lord and Saviour. His divorce was messy and painful but God has forgiven him and now he is ready to move on. Brian isn’t  interested in sex as he is also a born-again virgin. He  wants to take things S L O W. He is terribly disappointed if you swear, get drunk, make dirty jokes or show a bit of cleavage. He asks you to go to church with him so you too can be saved. Praise the Lord.

Ian has two Masters Degrees in Literature and is a Doctor of Philosophy. He is currently writing a book about the cultural influence of Ulysses. His conversation is peppered with words you’ve never heard before. He squints at you when you say “Yay” and corrects your pronunciation when you ask for a croissant. He wants to know about the last book you’ve read — but he’s never heard of Gone Girl.

Dave hasn’t shaved for days and his jeans seem a little tight. He holds on to your hand a bit too long when you shake it and keeps touching your arms while he talks. He hasn’t had sex for months. How do you know? Because he told you. He wants to send you a dick pic, but he asks your permission first (and of course you say “no”). He tells you he doesn’t mind if a woman has kids, credit card debt or bad teeth — he isn’t fussy. If you won’t go back to his studio flat after twenty minutes in a coffee shop, he will never call you again (thankfully).

Michael has never been married. He was engaged once but his mother didn’t like his girlfriend so they broke it off. He recently had to move back home to take care of Mom because she has a “nervous condition”. Michael is an only child and an accountant. He offers to do your tax return for free. You can bring your receipts when you come for Sunday roast next week. You tell him you can’t because you have promised to go to church.

Andrew expects you to call him to arrange the date, buy your own drink, and hook up with him later that night. He thinks all women are crazy bitches and he doesn’t believe in love. He is also incredibly handsome and smells amazing. Turn around and walk away.

Peter used to be a workaholic, but he is trying to spend more time relaxing these days. He goes surfing on the weekend but usually after a late breakfast of bacon and eggs. His is friends with his ex-wife and admires the way she is bringing up his kids on her own. He is still paying off the house he owns in the suburbs but he is renting it out so he can live near the beach. He drives an old beat up Jeep and spends his spare cash on a holiday once a year.

Peter doesn’t believe in God, but he does believe there is something mystical and magical about life. He makes the most of every moment because he knows life can end in an instant. He knows a lot about astronomy, cricket and economics, and not so much about classical music or pop culture, but he is keen to learn.

Peter loves flirting, romance, and sex. Although he is a little shy to start with, he responds enthusiastically to encouragement. His mum has passed away and he regrets he never got to say goodbye. He has heard of Pacman and the Mario Brothers but he has never had a game console. He stopped playing online Scrabble because it was wasting too much of his time.

Peter adores women and believes they can do whatever they want. He charms old ladies and small children with his blue eyes which light up the room.

Tell me, have you ever dated one of these ten types? Is there someone I’ve missed?