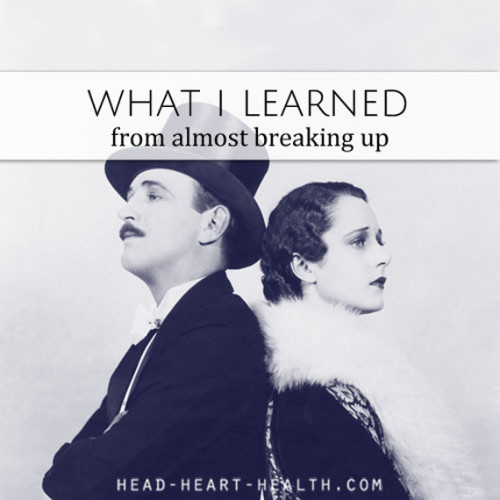 It was the perfect storm of bad timing. My boyfriend had been sick for two weeks with chickenpox and couldn’t stand to be touched, and just as he got well, I plunged head first into a period of increased hot flushes and insomnia. I was irritable and fractious, barking instructions to “get off me” when his hand on my hip felt like a hot iron branding my skin.

Over breakfast after another sleepless night, I noticed the frown on my boyfriend’s face.

‘What’s the matter?’ I asked, exasperation making my voice sound thin and brittle. ‘Don’t you love me as much as you used to?’

He hesitated and the world as I knew it seemed to slip into a muted palette of brown and green. My stomach lurched into my throat.

‘I don’t know,’ he said. ‘It’s as though you can’t stand me anymore. You don’t want to be near me, let alone have sex with me.’

A deep crevice appeared in the ground beneath my feet.  I had always believed it would take some kind of apocalypse for my boyfriend to stop loving me. He had seen me at my worst — broken and crying for months after my husband died — and still stayed around. He had long ago convinced me he wasn’t easy to scare off.

But here we were, staring at each other across the table, discussing an ebb in my sexual desire that had the potential to destroy everything.

Because my failed marriage was soulless and sexless, I believed that the success of my current relationship was primarily because of my sexual confidence and insatiable appetite. I was loved and valued because I was, as they say, good in bed. Even in my worst moments of grief, I had clung to the intimacy and warmth of sex.

And now this skill had disappeared in a haze of hormonal chaos. My body was betraying me in the worst possible way and I saw no way to fix it.

My boyfriend saw the tears running down my face, and must have seen the horror in my eyes.

‘What do you mean you don’t love me as much as you used to?’ I asked, my voice raw with pain.

‘I didn’t mean it like that,’ he said. ‘Of course I don’t love you any less. But it’s hard for me when I feel rejected all the time.’

The shadow of this conversation hung between us for hours… okay days really. My boyfriend has said his love for me was fading. I began constructing a wall of distance, to protect me from the pain of breaking up I now felt was my certain future.

Thankfully my boyfriend won’t let me get away with shutting down for very long. Eventually we sat outside under a meteor shower and talked about who, what and where we were.

What I Learned By Almost Breaking Up

• I am more than a sexual being. If my boyfriend just wanted sex, he could have picked anyone. He loves me because I am smart, funny, fierce, crazy and honest, as well as being sexy.

• All things can be endured with kindness. It wasn’t my lack of sexual desire that upset my boyfriend, but my dismissive, unkind reaction to his advances.

• My boyfriend is always in an impossible situation – if he pursues me sexually all the time (because he tells me I turn him on), when I turn him down he feels as though he’s pestering me. If he leaves me alone, I imagine he doesn’t find me sexually attractive because I’m too old/fat/boring/familiar etc.

• Like a cleverly worded survey, I can manipulate the answers to any question through the words I use. My boyfriend says I sometimes put words in his mouth. By asking ‘do you love me less?’ when I meant ‘are we having a problem?’ I set myself up to hear the worst.

• Everyone has doubts at some point in a relationship. Being able to withstand doubt from your partner is a difficult but necessary skill.

• I should resist turning every molehill into a mountain. Encountering a problem, disagreement or misunderstanding isn’t reason enough to expect my boyfriend wants to break up.

• Do unto others as you would have them do unto you — without expectations, without an agenda, without the promise of an outcome. This is the secret to love.

I am happy to report that my boyfriend and I are still together, and after a few nights of uninterrupted sleep our sex life is back to normal. If we came close to splitting up, it wasn’t because of him, or my sexual performance, but because of the dysfunctional stories I wove in my head.

Perhaps my doubts are a little more present than they used to be, and because of that, perhaps I’m trying a little harder. And that’s never a bad thing.

Have you learned a valuable lesson from a horrible situation?

26 thoughts on “What I Learned From Almost Breaking Up”