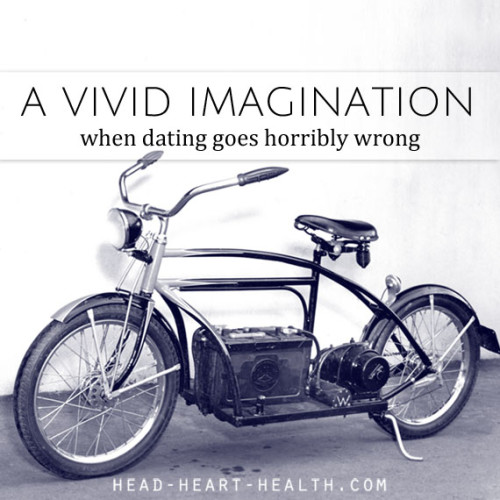 Roger intrigued me from the first moment I saw his on-screen name — Amare Sine Timore. I didn’t know what it meant and he wouldn’t tell me. I looked it up. Amare Sine Timore means ‘to love without fear’ in Latin. He had been emailing me daily for more than a week quoting John Keats’ poetry, arguing the finer points of existentialism and urging me to listen to work by an obscure composer named Jan Dismas Zelenka. Roger was smart, smarter than me. And intelligence was sexy.

Although Roger had my phone number and sent me a text every night before I went to sleep, we never spoke on the phone. With only his written words to conjure up images in my head, I turned him into the perfect man. I stopped going on dates. I imagined that once Roger and I met, I wouldn’t be interested in anyone else.

I dressed with care for our date, wearing a black halter-neck dress and uncomfortable black and silver strappy stillettos. I entered the dimly lit upstairs bar and caught sight of Roger sitting at the bar before he saw me. For a moment I thought it was his younger brother — there was a resemblance to Roger’s profile photo but the man I was looking at seemed smaller and thinner than I had imagined. It had to be him though, so I put on my biggest smile.

He stood up but he didn’t take my outstretched hand. His face turned a strange grey colour. He looked shocked, as if I was nothing like he had imagined either. Neither of us spoke for a few moments.

‘Sorry,’ he said, shaking his head. ‘I wasn’t expecting you to be, er, look like that. But you look nice.’

He moved his motorcycle helmet off the seat next to him so I could sit down. My leg brushed against his and he jumped as if I had given him an electric shock.

‘You’ve got a tattoo. You didn’t mention that. I’ve never been out with a girl with tattoos.’

‘You didn’t mention you rode a motorbike. I’ve never been out with a man with a bike. Maybe you can take me for a ride sometime?’

We ate gourmet pizza and drank red wine. I worked hard to make him feel at ease, unwilling to let go of the illusion that there was something I could say or do to release the man I wanted from beneath his pinched face, narrow shoulders and pale hands. After a few glasses of wine, he seemed more relaxed and confident. The conversation started to flow.

At the end of the night he left his motorbike parked in a side street.

He gave his leather jacket to wear to keep warm and held my hand as we walked down the back streets to my flat. I invited him in for another drink.

‘It’s not going to work, is it?’ he said, once we had settled on the couch.

‘I’m smart enough to realise you’re not interested in me romantically,’ he said putting down his glass. ‘I should go.’

I’m not sure if it was because I had invested so much of myself in the relationship already that it felt like we were breaking up, if I was sorry for him or if it was because it had been a long time since I’d had sex, but I didn’t want him to leave. I leaned in and kissed him. He kissed me back.

I took in into the bedroom and sat him on the bed. While he watched I untied the knot at the neck of my dress and wriggled the fabric down until it lay in a crumpled heap on the floor. I began unbuttoning his shirt.

He pulled away and turned his back to me.

He curled up into a ball on top of the covers and made a low moaning sound.

‘It really isn’t a big deal,’ I said putting my hand on his arm. ‘Why don’t you hop into bed and we can cuddle.’

I found a t-shirt on the chair in the corner and put it on. I got into bed. I heard what sounded like quiet sobbing so I left him alone.

When I woke up a few hours later he was gone. He’d taken his leather jacket, switched off the lights in the lounge and disappeared. The next morning he sent a text message.

‘Thanks for last night. All the best in finding your perfect man.’

When I remembered how upset he had been I felt sad. I felt as though I had lost something, something I’d never had to start with. But most of all, I was reminded that no matter how good someone sounds from the other side of a computer screen, you can never know them until you’re standing in the same room.

From my unpublished memoir Unravelled.

Do you have any dating horror stories?

31 thoughts on “A Vivid Imagination”