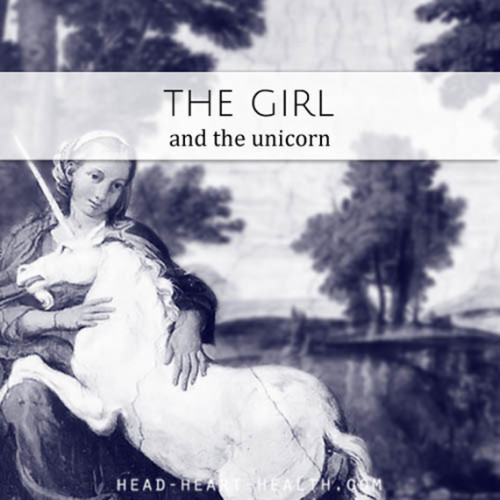 The girl had wished for a unicorn her whole life. She had seen the beautiful creatures in magazines with the most successful recording artists, models and actresses and she knew she was just the kind of person who could have one for herself. She also knew boys adored girls with unicorns and with one, she would be the most desirable girl in her world.

She worked long and hard, and spent many months exhausted and unhappy but she kept going because she knew once she had her own magical unicorn, all would be well. It would make her so happy she would forget the pain she had endured.

And finally that day arrived — she had scrimped and saved and had finally earned the right to have her own unicorn. It was what she had always wanted.

But the unicorn was flighty and bad-tempered. It was always trying to escape and needed constant supervision. She had to get up before dawn to walk it, she needed to continually compliment it throughout the day and it was so rude and moody that she just found it easier to stay home than to deal with taking it out in public.

Sometimes the unicorn would break free from its tether and run off into the woods. The girl would always drop everything she was doing and chase after it, eventually coaxing it back home.

One day the girl’s world unraveled. She lost the things she thought she had and found things she never knew existed. Suddenly, she couldn’t even think about tending to her unicorn.

And so the unicorn left. She didn’t have the energy to chase after it so she let it go. Alone at night she missed it desperately.

She met a boy — the kind of boy she knew was exactly what she needed but worried that without a unicorn she was less than her best for him.

“I used to have a unicorn you know” she sobbed “but I was lazy and distracted and it ran away. I want to get it back, but I don’t have the energy to chase after it, and I don’t have the time to tend to it now I have all these new things in my life. I wish I was stronger, more disciplined and focused so I could once again be a girl with a unicorn.”

The boy looked at her in disbelief.

“You do know unicorns are irrelevant don’t you? Everyone understands how temperamental and difficult they are to keep, and that unless you are born with one, their upkeep is a ridiculous amount of hard work.

And guess what ~ despite what you think, boys don’t care whether you have a unicorn or not. It makes absolutely no difference to how beautiful, sexy, accomplished, desirable and lovable you are.

If you want one, that’s entirely up to you, but in my opinion having a unicorn when it’s not natural is kind of forced and fake. It is not who you really are. Just be you — you’re wonderful just the way you are.”

And the girl didn’t miss her unicorn nearly half as much from that point forward. In fact, most of the time she forgot about it altogether. Probably because she was too busy having sex, laughing and being happier than she had ever been before.

17 thoughts on “The Girl and the Unicorn”