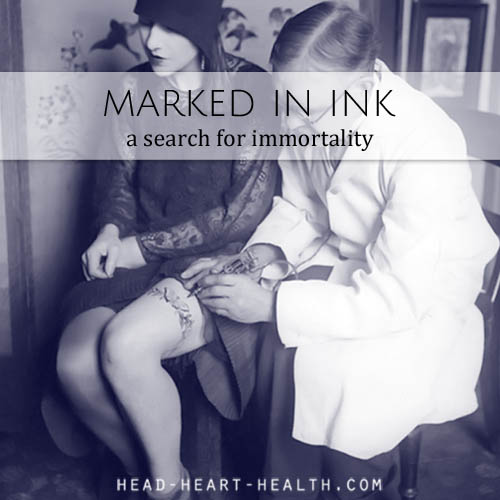 On my left wrist, scratched into my skin is a red heart with angel’s wings. I had it done on my 45th birthday at The Illustrated Man. It was the last birthday I spent with my late husband.

His birthday present to me was a fountain fashioned from a vase and a bowl, cobbled together to resemble something more elegant, more classy. The pump was noisy, louder than the gentle trickling sigh of water. Green mould gathered around the grey stones in the bottom. After a while I stopped turning it on. The cat used it as a giant water bowl.

When I remember that birthday, there is a quiet sadness that sits under the bright lights of my new and different life. A grey blanket of soggy melancholy wraps itself around my feet so I have to drag them into the day.

When I look at that tattoo I remember how he never liked it. Not this one or the one before it. I can’t remember if there was a reason. At least I know he didn’t come up with the normal objections – common, tacky, rough, unladylike – he just didn’t like tattoos. So the day he turned up with his own tattoo, a week after I’d left him, I was surprised.

Although I never told him, it was a beautiful tattoo. A Celtic pattern of curves and lines, arcs and points encircling his upper arm and creeping up on to his shoulder like ivy scaling a wall. It can no longer picture it exactly in my mind and there is no record of it. All I have is the impression of waves and thorns, of Gothic churches and pagan ceremonies. He didn’t have it for long. It was still raised from his skin, unhealed and unsettled on the day he died.

I used to think the inking of a tattoo on the skin was an attempt at immortality. Something permanent in a changing world; something predictable, enduring and constant. A tattoo is the closest thing to forever.

My husband wasn’t looking for immortality, he was looking in the other direction. I’m beginning to think his tattoo was an attempt to change the nature of his body so he might like himself more.

Do you have a tattoo? Does it have a special meaning?

20 thoughts on “Marked in Ink • a Search for Immortality”