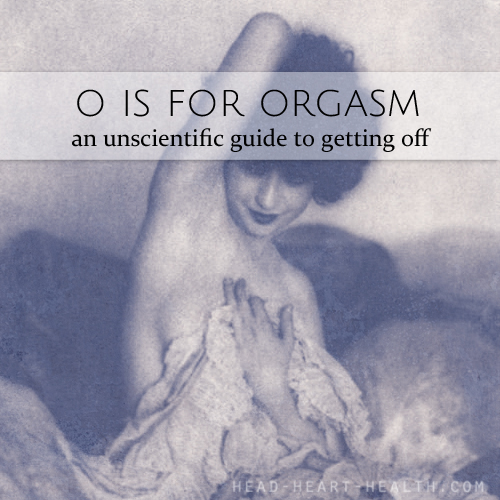 Unlike other days, it didn’t take me long to come up with a word starting with O. Orgasms are a subject near and dear to my heart.

But when it comes to writing a post about orgasms, what does one say?

Orgasms are good. The end.

Alternatively, I could get all medical on you and fill up the page with diagrams of the female anatomy with flashing arrows directing you towards the salient areas. But I’m sure you know the clitoris is on the outside and the G-spot is on the inside.

I was watching a documentary the other night that questioned whether women even had a G-spot. They based their findings on a survey where women self-reported whether they had one or not. Seems scientifically lacking to me. I’m not sure where my spleen is, I don’t know what it does, and I’ve never consciously used it, but that doesn’t mean it’s not there.

How to find your G-spot

I do have some advice about the G-spot if you’re interested in finding it (and I do think you’ve got one). Don’t try to figure it out, as they say, inflagranti (in the act of committing the crime). It will end in tears. Rather, wait until after you’ve had sex and then have a bit of fun. Challenge your partner to see if he can locate it with his finger. Direct him to the front wall of your vagina.

The G-spot is easier to find when you’re postcoital because your insides are engorged (ewww — see what I mean about words). You’ll know when he gets it, and so will he. He’ll say there’s a bit that feels different to the other bits (hopefully more eloquently than that).

Don’t go for a G-spot orgasm then and there though. Save it for the next time you get jiggy. Combine it with something else that begins with O…

In all seriousness, my greatest tip is to relax. When it comes to some orgasms, clenching your muscles is the opposite of what you should do. I would recommend you imagine releasing your cervix down as you exhale. That’s about as technical as I’m going to get.

Any orgasm is a good orgasm

Don’t think that unless you’re having all the orgasms you’re missing out. I’ve read that some women can orgasm just by thinking about it. My monkey mind gets too distracted for that to ever work. I prefer a bit of tactile assistance … either human or mechanical.

I’ve also read about cervical, vaginal, and nipple orgasms. I’m not even sure what the distinction is between them, and I don’t actually care — I just stick to experiencing the different flavours of inside ones and outside ones.

Do whatever works for you. And do it often. The best way to feel like having loads of orgasms is to have loads of orgasms. The longer you go without one, the more it sounds like hard work.

So do yourself a favour and get to it. Your body, your mind, and your spirit with thank you. A well-orgasmed woman is a joy to the world. 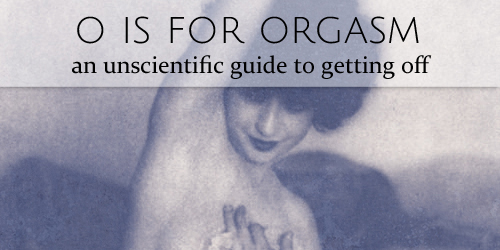