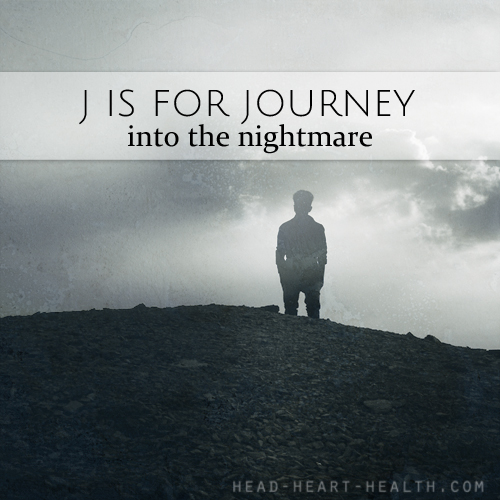 He is walking up the road in front of me, wearing the heavy boots he never took off, black jeans and a backpack slung over his shoulder. In his hand is a silver gift bag, like the ones they give away in expensive shops.

When he gets to the top of the hill, he turns the corner and I can no longer see him. I take off my shoes and run up the rest of the hill, worried he will have disappeared.

I come around the corner and he is standing there waiting for me, with his hand on his forehead to shade his eyes. He smiles as though I am somehow foolish for worrying.

“I wouldn’t have gone without saying goodbye,” he says.

Except for the grey in his shorter hair, he looks the way he did when I met him. He is lean and pale, his face shaped by the sharp angles of his bones. He looks like a young Elvis, before the drugs and booze took their toll.

“I brought you something,” he says. From the gift bag he pulls out a tiny squawking tabby kitten. It reminds me of how much he loved cats, how gentle he was with them. I remember him taking Izzy outside for the first time , standing guard as she crept tentatively on the grass. Or letting her lick the leftover milk from his cereal bowl.

“I can’t have a kitten,” I say. “It’s too much responsibility. There isn’t anyone to look after it when we go away.”

He looks wounded for a moment then shrugs and lets the kitten nestle into the crook of his arm.

“She’d be better of with you,” I say. “You’re good with cats.” The kitten has fallen asleep.

He hands the gift bag to me. Inside is a beautiful tie-dyed scarf in green, purple and pink. I take it out to feel its weight. It is soft and comforting like a blanket. When I drape it around my shoulders, I am no longer cold.

“I almost didn’t recognise you at first,” he says. “Your hair is long and the grey suits you. You’ve certainly changed from the girl I knew with spiky hair and masculine clothes. The scarf should suit your new look.”

I take off the scarf and put it back in the bag.

“No,” I say. A heavy weight presses against the inside of my chest. “You can’t just leave again without telling me why.”

“It makes no difference,” he says. “You and I don’t exist anymore. I don’t know if we ever existed. It wasn’t your fault. I loved you the best way I knew how, but it wasn’t enough. It was never going to be enough. Nothing you could have done would have changed anything.”

He looks at me and smiles. “Kitty and I will be fine,” he says. He walks past me, back down the hill we’ve both just climbed. The sun is setting behind the trees and his shadow grows long.

But once again, it’s too late.

12 thoughts on “J is for Journey • #atozchallenge”