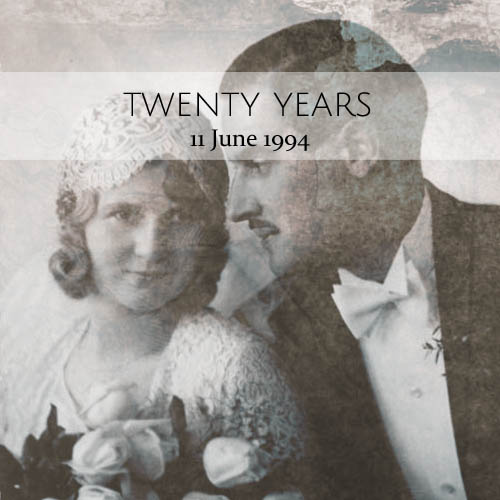 It’s been a while since I’ve spoken to you, but today it is twenty years since we were married, so you’re on my mind.

The last four years, since you’ve been gone, have passed by so quickly, and there’s so much you’ve missed. Why, just yesterday, Rik Mayall passed away. I cried for the loss of his smile in this world, and because you would never know.

Perhaps you do know. Maybe he’s with you somewhere, chuckling to himself about all the fuss he’s caused.

This year I don’t want to remember the bad things, to waste time regretting the decision I made twenty years ago, to wonder what would have happened if I’d made a different choice. This year, I want to talk to you — you know, man to man. I harp on and on about the silence in our marriage but it was my fault too. Somehow I was scared that if I told the truth then you’d leave me. In the end, it made no difference — you still left anyway.

It’s awkward to have this one way conversation, not being able to see your face, to watch you smile or frown at what I am saying.

‘You’re crazy,’ you would say if you could hear me, either laughing or shaking your head depending on what mood you were in.

The thing I have to say is this: I don’t know what I could have done differently to make you want to stick around. Maybe if I’d left sooner, maybe if we had admitted defeat, realised that we were never going to be right for each other. We were a mismatched pair of jigsaw pieces — our edges never destined to interlock. A disaster waiting to happen.

I’m over it now, more or less. The part of my heart you ripped out when you left has all but sealed over. Even though the new flesh is still tender and sensitive, the wound has stopped weeping. I have stopped weeping. Except on days when people die and I think about you.

I hope you are resting in peace. I hope your new life is easy and painless. I hope the love of the Universe has made you forget those last moments of anguish.

Happy anniversary to you my absent husband.

May the angels remind you that you were loved and you are missed.

[My husband tragically took his own life in April 2010]